Bollywood stars are known to make heads turn and the crowds go ga-ga when they are invited for public events. Initially the tradition was of signing autographs but now, the younger lot has embraced the fancies of the world and has started clicking selfies with their fans.The inauguration of the HN Reliance Foundation Hospital in Mumbai witnessed the stars reverse their roles.

At the inauguration of Nita and Mukesh Ambani’s hospital, Prime Minister Narendra Modi was the most important guest. The Bollywood stars took a different role and were seen excited about meeting the newly elected PM.

Actor Sonam Kapoor, the fashionista of Bollywood was seen capturing a seflie with the PM and captioned it saying that it was the best selfie ever.

The younger stars didn’t seem to be far away as Shraddha Kapoor and Aditya Roy Kapur followed Sonam’s steps and got clicked with Modi.

The next person to join the selfie bandwagon was singer Sonu Nigam and wife Madhurima captioning it ‘The ModiNigam Selfie’.

Apart from these, the other stars who were seen at the inauguration were Shah Rukh Khan, Saif Ali Khan and Aamir Khan. The other stars present were Kareena Kapoor Khan, Kiran Rao, Hrithik Roshan, Sachin and wife Anjali Tendulkar and the handsome Varun Dhawan. Super star Amitabh Bachchan attended the event with his beautiful bahu Aishwarya Rai Bachchan.

The PM not only won the hearts of the common man but is also the hero among the Bollywood stars. For a change, the stars turned into fans. Well-done Mr. Modi! 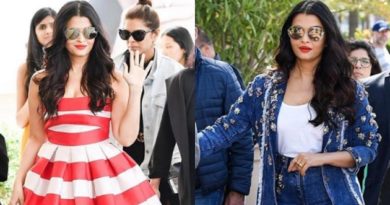 These actors are making their ‘comebacks’ with a bang!

October 22, 2014 Swati Chincholikar Comments Off on These actors are making their ‘comebacks’ with a bang!

Shahrukh Khan – ‘Knight of the Legion of Honour’.

July 2, 2014 Today Bollywood Comments Off on Shahrukh Khan – ‘Knight of the Legion of Honour’.