Farhan Akhtar who is Hindi film industry’s notable and successful actor, director, singer, producer and TV host is known for his versatility. His hard work has made him successful in Bollywood and today his efforts to create awareness for women safety have been paid too. UN Women, the United Nations organization dedicated to gender equality and women’s empowerment has appointed him as its South Asia Goodwill Ambassador. Farhan is the first man to be chosen as a Goodwill Ambassador in the organization’s history.

“We are pleased and honored to have Farhan as our Goodwill Ambassador for South Asia, for we believe his work and values represent the core values of UN Women,” UN Women Executive Director, Phumzile Mlambo-Ngcuka, announced during her visit to Mumbai, India.

Farhan had started his own campaign in 2013, ‘MARD’- Men Against Rape and Discrimination. After its launch, the campaign became a hot topic on all social networking sites and received a positive feedback and support from many Bollywood actors.  He was seen promoting this cause at IPL season 6 where he distributed around 70,000 moustaches among the audience at Eden Gardens, Kolkata. His campaign aims to sensitize men and create awareness about women’s safety.

Farhan will be committed to promote women empowerment across South Asia. He will also serve as an advocate for UN Women’s newly launched ‘HeFor She’ campaign. This campaign is aimed at placing men at the center of activism and dialogue to end inequalities faced by women around the world. India and other countries in South Asia have faced many instances of women violence including fatal gang rapes. According to the Executive Director, Farhan is an ideal representative for communicating the need for gender equality to his male peers. Committed individuals like Farhan will definitely push gender equality and women empowerment agenda. This title will probably also give momentum to his initiative. “I am supporter of UN Women’s ‘HeFor She’ campaign and the role men can play in stopping crime against women and working towards gender equality”, he added.

Farhan’s passion and belief will definitely motivate men and boys around the world to act as a catalyst for change. Let’s support him and help create a value system to end gender inequality. 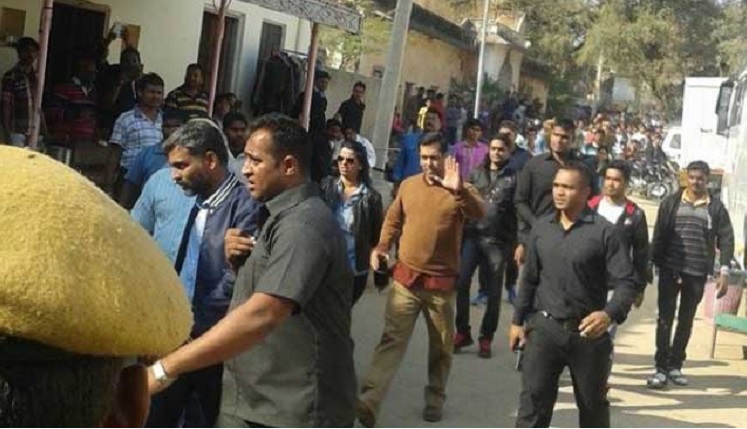 Crowd Goes Out of Control on Sets of Bajrangi Bhaijaan

January 7, 2015 Today Bollywood Comments Off on Crowd Goes Out of Control on Sets of Bajrangi Bhaijaan

Ness Wadia receives threat call from underworld to back off from Preity Zinta’s molestation case?

June 18, 2014 Today Bollywood Comments Off on Ness Wadia receives threat call from underworld to back off from Preity Zinta’s molestation case?